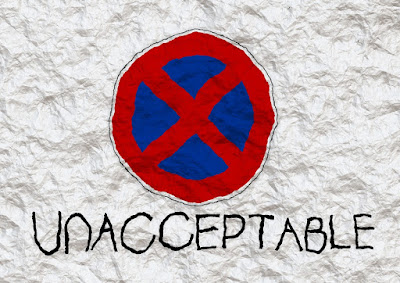 Cause and effect is a simple yet invaluable concept that is learned at a very young age. IF you touch the stove, THEN you will get burned. IF you don’t eat, THEN you will get hungry. As we mature, this set of causal relationships is engrained in our behavior. We become hardwired to avoid negative consequences.

What happens however when the threat of those consequences are removed? Would we drive the speed limit if there wasn’t a threat of seeing those flashing blue lights in the rearview? Would we waste our valuable time aiming for those eight hours of sleep if we felt fine getting only a couple each night?

Would your boss think twice about making a lewd “joke” if there was a threat of actual consequences?

Harassment often starts as an off-handed comment. Perhaps it’s inappropriate language, a misplaced insult or even a suggestive compliment. When that isn’t met with opposition, or even the fear of reprimand, then it can gradually escalate. An insult can turn into a mumbled racial slur; a suggestive compliment can turn into a sexual advance. It’s a vicious cycle of provocation, harassment and intimidation, which if left unchecked, will continue playing on repeat.

Unfortunately, this lack of reprimand has created workplace environments in which unacceptable behavior has become the daily norm. Offensive speech is passed off as “water-cooler talk”, sexual innuendo is just being “one of the guys”, and what would in most circles be considered hate speech is just “messing around”. This atmosphere can become endemic to a workplace without any indication to new employees that they’re entering a hostile work environment. While it may be the day-to-day for those who have become numb to the behavior, it can be devastating for those on the receiving end of the harassment.

The seemingly simple solution - report the incident as soon as it occurs. Correcting negative behavior before it intensifies is always easier than trying to adjust it when it becomes the norm. This is much easier said than done, however.

Fear is a powerful thing; a terrible and controlling thing. The threat of losing your job, be branded a “rat”, being viewed as culpable just by association is more than enough for most victims to opt for silence. Fear is also often leveraged as a direct threat by the aggressor. IF you speak out about this I’ll deny it and you’ll get fired.

Embarrassment is an equally paralyzing deterrent for reporting undesirable behavior. The emotional impact of being bullied, sexually harassed, or intimidated cannot be overstated. It leaves many victims choosing silence over reporting, despite the long-lasting psychological impacts.

Even if the hurdles of fear and embarrassment can be overcome, many workplaces do not have the structure for victims to report an incident to the appropriate persons within an organization.

The Woices app was specifically designed to break this cycle of silence. It singlehandedly enables employees to reach top management instantly, directly, and discreetly, by hiding their identities, thus removing the barriers of both fear and embarrassment. While this is extremely powerful for the individual reporting harassment, it becomes exponentially valuable in detecting patterns of abuse from specific individuals.

Allegations are unfortunately easily dismissed when it appears to be a single incident, however when victims are given a means to report without retaliation or judgment it can build a history and clear picture of the bad characters within a workforce.

Woices doesn’t just help employees speak up and be heard without fear or hesitation, it also enables a company invaluable insight into a possibly toxic work culture. This toxicity is counterproductive to employee morale, productivity and a sense of belonging which helps create a positive workplace culture.

Additionally, addressing abusive or inappropriate employees early on can avoid the potentially damaging development of sexual harassment or civil lawsuits and the accompanying public relations nightmares.

Woices goal is to create a safe and respectful workplace for all. There is no better way to STOP the cycle of abuse within a toxic work environment.

From an infrastructure perspective, implementing the Woices app is an easy task of a few hours of setup. The return is an unparalleled ability to identify concerning patterns and alert top management to implement timely action, counseling, or training.

Identical to the learned consequences of our youth, those that violate our basic human rights must be identified AND held accountable before the pattern of disrespect and harassment can be broken. It isn’t enough for them to know what they are doing is wrong, they must have a direct correlation between negative behavior and punishment.

Popular posts from this blog

April 10, 2019
HAPPIER EMPLOYEES = GREATER PRODUCTIVITY
33% - We spend about a third of our lives at work! Let that sink in.
It’s no longer a secret. Having a positive work culture directly influences employees in a positive way. Happy employees are much more likely to give it their best at work (think productivity). When employees wake up motivated and excited, as opposed to dreading going into the office and “working toward the weekend”, the results are going to reflect it.
An average employee spends a third of their life at a workplace; imagine how influential that workplace becomes to the individual. Hours upon hours are spent meeting deadlines and expectations of the company. If that influence is positive, the outcome of the work is much more likely to be positive. Instead of simply getting the work done, if an employee is truly vested in the company and feels both value toward and valued by that company, then their work will reflect these attitudes.
Naturally, when an employee is satisfied wi…
Post a Comment
Read more

Giving a Voice to The Silent Majority

May 13, 2019
“We’re on the best places to work list!” It’s something employers love to brag about, but one has to wonder whether the lists serve a useful purpose. Workplace rankings can be found all over the web. They’re featured on sites such as Business Insider, Glassdoor, and Forbes, just to name a few.
One of the biggest flaws of those rankings however, is the fact that the human dynamics of an organization can’t be summed up in a single study. In many cases, high-level surveys from outside parties aren’t even going to touch on hard hitting topics that employers prefer to avoid. Think office politics, workplace stress, and even harassment.
Sexual harassment in the workplace isn’t easy to talk about, yet it’s something companies literally can’t afford to ignore. A study found that for every employee harassed in a company, that employer loses out on $22,500 annually in lost productivity.
A taboo within workplaces The common school of thought for employees is that when an individual sees somethin…
Post a Comment
Read more

May 13, 2019
A nationwide survey launched by Stop Street Harassment to understand why the #MeToo movement gained so much traction has revealed that 81% of women and 43% of men in the United States have experienced some form of sexual harassment in their lives. Approximately 26% of these sexual harassment cases occurred in the victim’s workplace. With one in fiveemployees facing sexual harassment at their place of work, it is clear that it is time to revolutionize the way harassment cases are reported and processed.

Based on a comprehensive study of harassment in the workplace in 2016, the U.S. Equal Employment Opportunity Commission (EEOC) recommended that companies integrate standardized anti-harassment policies into their company cultures. The EEOC emphasized that the harassment reporting system a company uses is crucial to successfully combating workplace harassment. In the report, the EEOC suggests that companies should have a reporting system that: Allows employees to report misconduct quickly…
Post a Comment
Read more